My Death, My Decision (MDMD)

My Death, My Decision is a right-to-die campaign organisation that wants to see a more compassionate approach to dying in the UK, including giving people the opportunity to have a medically assisted death if that is their considered choice (assisted dying).

We believe that medically assisted dying should be available to all mentally competent adults with incurable health problems that reduce their quality of life permanently below the level they are willing to accept, provided this is their own persistent request.

Unlike Dignity in Dying (the largest UK assisted dying campaign group), we do not think this option should be restricted to those who are terminally ill with a prognosis of 6 months or less. Many people are left incurably suffering for longer than 6 months. Doctors are not always able to give an accurate 6 month prognosis. Doctor opposition to the 6 month criterion was one of the reasons why recent attempts to introduce assisted dying legislation was rejected. Find out more…

We seek to work with the medical community and legal experts to agree a workable set of safeguards which will protect vulnerable people, while allowing personal autonomy to those who feel their life is complete and no longer wish to endure their worsening conditions, preferring the option of assisted dying.

My Death, My Decision (formerly SOARS, The Society for Old Age Rational Suicide) was established in the UK in 2009, by Michael Irwin, a former GP, Medical Director of the United Nations, and chairman of the Voluntary Euthanasia Society (which has since become Dignity in Dying). MDMD is a member of the World Federation of Right to Die Societies.

If you are seeking help for yourself or a relative, our page about Current End of Life Options offers generic information on the current UK situation. Please note that MDMD do not offer any personal assistance or advice on how to end your life. We are a campaign organisation working within the law to help bring about a change in the law to allow better end-of-life options in the UK.

On this website you will find lots of information about our point of view, our campaign activities and our response to opposing arguments. There are also sections on what steps you can take for yourself and how you can help us further our campaign.

If you agree with our objectives, JOIN US! We need your support.

If you have comments or feedback, please let us know here.

Many of us would like to have some control over the time and manner of our deaths, should we find ourselves in a condition so hopeless that there is no point in going on…

There’s no advantage to ageing. You don’t get wiser, you don’t get more mellow, you don’t see life in a more glowing way. You have to fight your body decaying, and you have less options.

It’s important to give people with dementia choice and control over their life whenever possible.

George McNamara, Head of Policy at the Alzheimer’s Society, 2013

Elderly and frail patients should sometimes be allowed to die rather than receive treatments that prolong but do not improve their lives…Society these days is much less familiar with death, and is most reluctant to accept mortality

In refusing dying people the right to die with dignity, we fail to demonstrate the compassion that lies at the heart of Christian values.

Only with a legal Euthanasia Bill on the statute books will the many people who find themselves in the same situation as me be able to slip away peacefully in their sleep instead of dreading the night.

Lord Rix, Former actor, cross bench peer and President of Mencap, 2016 in a letter to the Speaker of the House of Lords

My Death, My Decision's Chair Trevor Moore recently visited our newest patron, Paul Lamb. Find out about his upcoming legal case and campaign for a compassionate right-to-die. 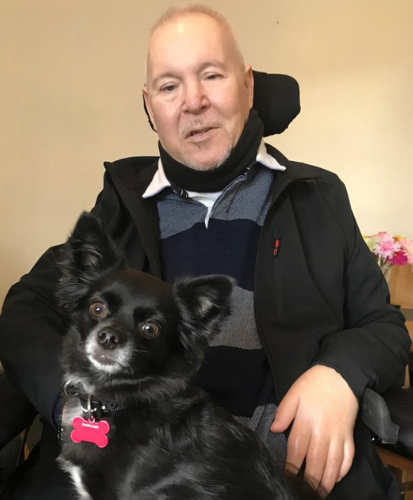 The Canadian Government has launched a consultation on changing its law on medically assisted dying. Under its current rules, Canadian adults who are of sound mind can voluntarily request an assisted death, if they suffer [...]

Early in December, My Death, My Decision supporter Richard chose to end his life in Switzerland.  Richard had been suffering from motor neurone disease, an incurable condition which can result in someone’s [...]

Today, the High Court has rejected permission for Paul Lamb, a severely disabled man, to challenge the law on assisted dying.  Paul, who is paralysed from the neck down, requires 24-hour care, by a team [...]