The Office of National Statistics has recently published data on cause of death in 2017. For the third year running Dementia and Alzheimer’s is the leading cause of death, and the trend is increasing. We have been monitoring this significant trend since it was first reported in 2016. See our previous reports on the 2016 and 2015 data.

The first summary point of the report on the 2017 report states: 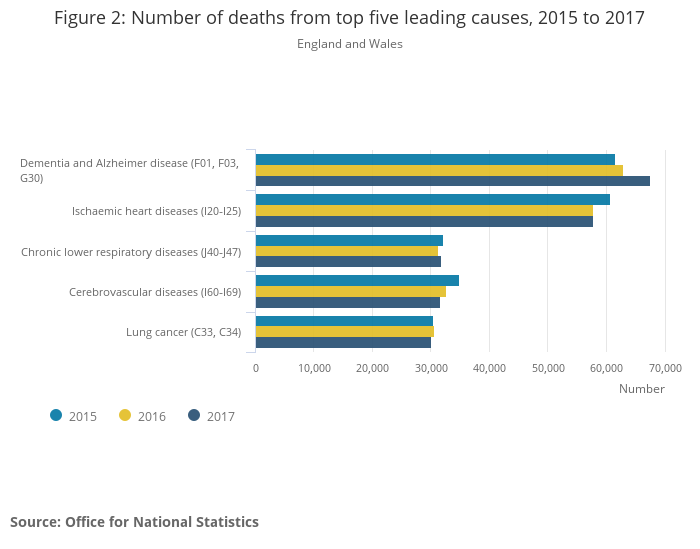 The annual ONS report groups causes of death according to a classification system developed by the World Health Organization (WHO), modified for use in England and Wales. The report explains that “at the broad disease group level, cancer remained the most common cause of death in 2017 (28.1% of all deaths registered), followed by circulatory diseases, such as heart diseases and strokes (25.0%).” However this latest report gives a greater level of detail in its analysis, separating out various different cancers for example

The report identifies several reasons why the statistics are showing a marked increase in deaths due to dementia and Alzheimer disease:

MDMD’s coordinator Phil Cheatle says: “This continuing trend highlights the increasing importance of dementia and Alzheimer disease, especially for the elderly. It reinforces MDMD’s position that assisted dying legislation needs to give the option of an assisted death to people suffering from these terminal diseases. We believe that this can only be done safely while the person still has the mental capacity to make a life ending decision. This applies to people in the earlier stages of dementia and is the criterion used for dementia sufferers who seek a medically assisted death in Switzerland, like MDMD campaigner Alex Pandolfo. Unfortunately a law restricted to those with a life expectancy of six months or less would not help dementia and Alzheimer sufferers as by the time they reach this point, (which is impossible to accurately predict), they will not have sufficient mental capacity.”

Your ticket for the: Dementia and Alzheimer’s still increasing as leading cause of death