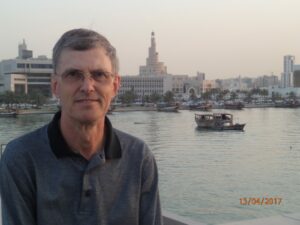 Early in December, My Death, My Decision supporter Richard chose to end his life in Switzerland.

Richard had been suffering from motor neurone disease, an incurable condition which can result in someone’s muscles wasting away and significant mobility problems. Diagnosed with the condition in 2018, Richard’s illness became progressively worse and eventually resulted in the need for a wheel rollator to move. Knowing that he would eventually become wholly dependent upon a ventilator to breathe, Richard decided to end his life before he deteriorated further.

In a message written before his death Richard said:

‘Probably the most common argument raised by opponents of an assisted dying law is that the vulnerable might be coerced into ending their lives… the process of applying to Switzerland is arduous and involves several discussions with doctors and others, during which the professionals would readily identify anyone acting against their will. [This may be] being used as a smokescreen to conceal opponents’ true motives, which may be more controversial and rather harder to justify’.

‘My wife and I decided to approach Dignitas as soon as we realised what is involved in the natural final stages of MN (motor neurone disease)… We regard ourselves as very fortunate to be able to afford Switzerland. We are aware that so many who would like to go simply don’t have the means.’

Trevor Moore, Chair of the campaign group My Death, My Decision said:

‘It is shameful that Richard was denied the most basic of human rights to choose how, when, and whether he died in this country. His story serves as a stark reminder of both the impact and importance that a change in the law could bring to those who are incurably suffering or terminally ill.

Fundamentally, dying in a manner and timing of your own choice should not depend upon someone’s financial means. More than one person a week now travels abroad to end their life, but many others cannot afford to make such a journey. In a civilised country, such as our own, we surely should not fail to respect the rights of our citizens or simply export their suffering to other places.

We are grateful Richard was able to find a peaceful, painless, and dignified death abroad – but will continue his fight for a compassionate choice and change in the law in this country. Our thoughts are with his loved ones during this sensitive time and to everyone else touched by his life’.

Your ticket for the: MDMD marks the death of assisted dying supporter