Skip to content
Home|Opinion Poll, UK Parliament|93% think that assisted dying is acceptable in at least some situations
Previous Next

MDMD has released the results of research it sponsored through the National Centre for Social Research (NatCen). The work tested public acceptability of various forms of assisted dying. In all cases considered the person is suffering from an incurable illness and feels their quality of life in below the level they are prepared to accept (or will soon become so). They have sufficient mental capacity to make a life-ending decision and have considered this option carefully, discussing it with professionals who have agreed that their request is within the (hypothetical) law. The different conditions tested were:

The results are discussed in detail here. 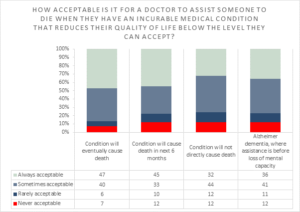 What is astounding about these results is the very high level of support for all these forms of assisted dying. Depending on the scenario, between 88% and 93% of respondents thought it acceptable in at least some situations. Comparing results between the scenarios, it demonstrates clearly that public opinion is strongly in favour of the sort of broader approach to assisted dying favoured by MDMD, as opposed to narrower approaches based on the law in Oregon which limit assisted dying to those who are within 6-months of dying. MDMD is proud to be a founder member of the newly formed Assisted Dying Coalition which brings together the UK organisations campaigning for this broader approach to assisted dying.

We were surprised that the research found that the strongest support was for those whose illness would eventually kill them, regardless of timescale. In this situation 93% of respondents thought that a medically assisted death was acceptable in at least some situations. That is a huge majority.

The current law in the UK prevents assisted dying in all situations. Our new research shows that the doctors and politicians who continue to oppose a change in this law are even more out of tune with the people they are supposed to be serving than was previously thought. How can we have confidence in the medical profession if they do not respect our rational end-of-life wishes? How can we have confidence in our politicians if they refuse to change a law which makes some people suffer unnecessarily, against their will at the end of their lives – making others decide to go to Switzerland for medical assistance to end their lives, often too soon?

Palliative care is a wonderful service that helps many people – and could help even more with increased funding. But even the best palliative care can not help in all situations. I recently asked Baroness Finlay, a leading professor of palliative care and strong opponent of assisted dying, how I could avoid an unpleasant end of life like my mother’s, if I too was diagnosed with dementia. Her answer – to look on the internet for illegal lethal drugs – is totally unacceptable and shocking. 88% of people in our poll think that in some situations like this, assisted dying is acceptable. We demand a more compassionate, patient-centred approach to avoiding end-of-life suffering, an approach that includes medical assistance to die as a last resort.

Of course, agreeing that it would be “acceptable for someone to have medical assistance to die” is significantly different from agreeing to a specific change in the law, where all the safeguards have been carefully thought through. But what is clear is that the debate now needs to move on. We should be no longer discussing whether or not assisted dying should be permitted, but instead be working on the details of how assisting dying can be safely and comprehensively introduced, ensuring adequate protection for those who may be vulnerable. In doing so we should learn from other jurisdictions where some form of assisted dying is permitted.

It is bitterly disappointing that the palliative care medical community are so reluctant to talk constructively about improving end-of-life choice when it includes assisted dying. In the eyes of 93% of the people surveyed, that can only undermine the reputation of palliative care. That is unfortunate, as good, comprehensive, patient-centred, palliative care is an important component in ensuring that as many as possible have, what for them, is a good death.

You can read our full description of the poll and results here, with technical information here.

MDMD are pleased to see that our poll methodology was replicated by End of Life Choices, Jersey. They commissioned 4insight to run a poll with the same questions for 1,420 Jersey inhabitants. The results are in line with the MDMD results and in some cases show slightly stronger support. The Jersey report can be read here.