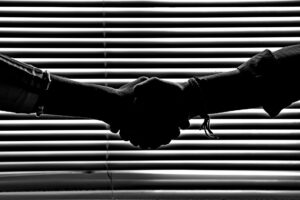 A Facebook advertisement by the anti-assisted dying organisation Our duty of care UK has been taken down for failing to disclose who paid for it.

The advert, which encouraged doctors to vote against changing the British Medical Association’s stance on assisted dying, was seen by more than 3,000 people before it was removed by Facebook.

The group ‘Our Duty of Care UK’ now states on its website that it is funded in part by the anti-assisted dying group Care not Killing, though reportedly failed to disclose any connection when it unsuccessfully lobbied the Royal College of Physicians last year against dropping their long-standing opposition to assisted dying.

The news that anti-assisted dying advertisements have been funded by undisclosed backers follows after it was reported last year that dark money groups – who campaign to restrict abortion rights in the USA – had been funding campaigns against assisted dying in the UK.

According to Facebook’s website, the advert ‘ran without a disclaimer. After the ad started running, we determined that the ad was about social issues, elections or politics and required the label. The ad has been taken down.’

Trevor Moore the chair of the campaign group My Death, My Decision said:

‘Assisted dying is a complex and emotive topic, which demands sensitivity and careful discussion. It is incumbent upon those who advocate either for and against changing the law to make sure we hold ourselves to the highest standards and engage in an open, transparent, and honest debate.’

‘To gain trust in the public debate we all need to ensure that statements are supported by verified evidence and are not alarmist or ideological. That means keeping sight of what drives the debate – compassion for real people.’

‘It is a national disgrace that adults of sound mind, who are incurably suffering or terminally ill, do not have the benefit of a law that gives them the option to choose how and when they die. But, there is a better way forward. New evidence from countries, including Canada, demonstrates a balance between respecting autonomy and robust safeguards can be achieved.  I encourage doctors who believe in empathy and dignity to vote in support of legal, compassionate, and safeguarded assisted dying.’