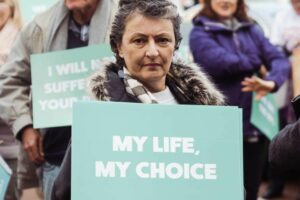 A diverse range of thirty doctors, philosophers, academics, and campaigners have signed an open letter, which appeared in the Guardian today, urging members of the British Medical Association to support assisted dying in the ongoing survey.

The joint letter was organised by the UK Assisted Dying Coalition, of which My Death, My Decision is a founding member, and follows just days after the Royal College of GPs voted to maintain their opposition to assisted dying, despite a majority of GPs wanting to move to a neutral or supportive position.

The full letter and list of signatories can be found here.

Trevor Moore the chair of My Death, My Decision said:

‘In the last decade, there has been an overwhelming shift in popular support for assisted dying, which the BMA’s policy has lagged behind. More countries than ever now have legal, safe, and compassionate assisted dying – and it is time we follow suit’.

‘By choosing to remain opposed to assisted dying and retaining a position which closes down debate and discourse, the BMA will not be stopping the public or our decision-makers from continuing to consider reform. Instead, they will prevent themselves from constructively contributing to a national conversation and send a signal which risks alienating doctors from the wishes of their patients’.

‘We were proud to have lent our support to the voices of doctors and leading ethicists who would like to see a change in the BMA’s policy, and hope doctors who support reason, compassion, and empathy will vote in favour of assisted dying’.