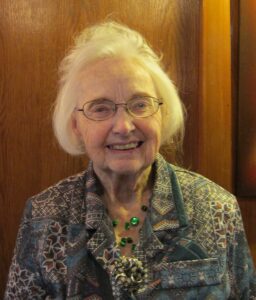 My Death, My Decision was sad to learn that the celebrated right-to-die activist Barbara Smoker has died aged 97.

As a former Chair of the Voluntary Euthanasia Society (now known as Dignity in Dying), Barbara was at the forefront of several social justice movements within the UK for more than 70 years including humanism, abortion rights, prison reform, as well as being an early advocate of legal, safe, and compassionate assisted dying.

During her tenure as the Chair of the UK’s leading assisted dying organisation, Barbara edited the now landmark book: ‘Voluntary Euthanasia: experts debate the right to die’ (which featured contributions from our Associate Director Dr Colin Brewer), and resisted suggestions that a change in the law should be restricted to those with six or fewer months left to live, stating:

‘Why should the question of terminality be regarded as a relevant criterion at all? Indeed, provided pain is adequately controlled, the terminally ill patient is less likely to need euthanasia than someone whose equally distressing illness or disability is not terminal, since the latter could face many years of suffering. The two most important criteria are surely the intolerable nature of the condition and its incurability – the proper question being whether an intolerable condition is apparently incurable, not whether it is terminal’.

‘Throughout her life, Barbara stood up to help others and protect their rights. She was a loyal friend to the right-to-die movement and her presence will be missed by all who knew her. Barbara’s achievements stand as a testament to her character, values, and commitment towards creating a better world. The thoughts and wishes of everyone at My Death, My Decision are with her friends and family during this difficult time.’

‘Barbara would not have minded being characterised as a ‘tough old thing’. As well as her activism in many fields, she wrote poetry and was a regular contributor to competitions in literary journals, quite often winning them. Always surprised to have survived for much longer than she expected, she continued to attend secularist meetings and to support the original aims of the Voluntary Euthanasia Society after its successor Dignity in Dying adopted  an Oregon-style six-month limit without consulting the membership. She was open about her sexuality well before that became almost unremarkable and did not let increasing deafness have much effect on her activism. I hope it is not true that ‘they don’t make them like that anymore’ because the world badly needs people like Barbara’.