On 29th November 2018 Baroness Ilora Finlay gave a talk at Bristol University titled “As the light fades: Do law and ethics collide?”. Baroness Finlay is a professor of palliative medicine at Cardiff University and a long-standing prominent opponent of assisted dying. Her talk gave a full account of the problems and dangers she sees with assisted dying legislation as it exists in various countries around the world. MDMD is sympathetic to at least some of her concerns, but reaches different conclusions. In Baroness Finlay’s view no change in the law is necessary or desirable, in part because one option people already have is to refuse life sustaining medication.

In the Q&A section MDMD Coordinator, Phil Cheatle, asked a question regarding dementia, a terminal illness where sufferers do not require life sustaining medication which can be refused. Dementia is particularly important as it is feared by many people and is increasingly common. The discussion about how assisted dying can safely be made available to dementia sufferers is something which is actively being discussed and reviewed around the world. In Switzerland medical assisted suicide is permitted for those with early stage dementia provided the person still has the mental capacity to make a life ending decision at the time of the assisted death. In the Netherlands and Belgium euthanasia is permitted for those with dementia who lack mental capacity provided they have written an advance decision requesting euthanasia in those circumstances. In USA and Canada there is public debate about possibly broadening their assisted dying laws to include people suffering with dementia.

In Phil’s question to Baroness Finlay he explained that his experience of his mother’s end of life suffering from dementia taught him that he really didn’t want to die like that. He then asked:

“What should I do to avoid an unpleasant death from dementia?” 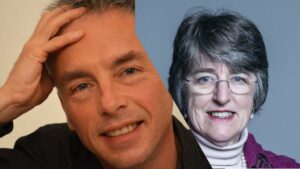 Baroness Finlay started by saying that with dementia a patient doesn’t have mental capacity. Phil clarified that he was thinking of early stage dementia before mental capacity was lost. Baroness Finlay then said “Putting it bluntly, there’s no law against committing suicide.” Phil responded by asking how people should do this without access to appropriate medication. She replied by saying that “there are people ordering drugs over the internet now and taking overdoses”, though she was very clear that she was not suggesting that people should do this. Phil followed up by pointing out that this was highly risky, and that you can’t be sure what you are buying. Surely there must be a safer way to ensure people have a good death?

Baroness Finlay then explained that if society were to decide that lethal medication was to be legally obtainable within the UK, then there would need to be a body which brought a set of different skills together to ensure safeguards were followed. She mentioned clinical psychologists, for example, to assess the person’s mental state. She questioned whether the medical profession should be involved at all, saying “why is it a medical duty, if you want to commit suicide and you have early dementia and you have capacity, then why is it a medical duty to supply you with lethal drugs? And if the law is going to change, why not have other groups in society assess you, people who can legitimately make sure that you’re not being coerced, that you’re not being pressurised?”

Reflecting on her answer afterwards, Phil Cheatle said: “It is very surprising that Baroness Finlay answered my question by saying that ‘there’s no law against committing suicide’, as if that were an acceptable answer to the very real concern that I raised. Surely palliative care should be able to offer something more compassionate, while respecting the person’s end of life wishes? Feeling the need to take one’s own life, without the opportunity for professional help in evaluating if that is really the best death possible, and without safe access to appropriate methods, is something MDMD wants to avoid. The MDMD website lists many reasons why taking your own life, unaided, is dangerous and unacceptable.”

“MDMD shares Baroness Finlay’s desire for strong, effective and workable safeguards in any assisted dying legislation. We welcome any opportunity for constructive discussion about the nature of the regulatory body she suggested. This approach may be a way forward to break the current impasse between the medical, legal and political positions. However, MDMD would prefer assisted dying to be closely integrated with palliative care, as happens in parts of Belgium, as this would help ensure that all palliative options were considered before choosing a medically assisted death.”

[Updated 18th May 2019 after MDMD was given access to a transcript of the discussion of Phil’s question which enabled a more accurate reflection of the views Baroness Finlay expressed.]