Skip to content
Home|Uncategorized|MDMD welcomes the news that patron, Paul Lamb, intends to bring a new right-to-die case
Previous Next

Paul Lamb, who previously took his case for the right to die to the Supreme Court, is now seeking to bring forth a new attempt to change the UK’s law on assisted dying.

Paul Lamb, 63, was severely injured in a car accident in 1990 and has no function below his neck apart from limited movement in his right hand. He requires around the clock care and is in constant pain. Mr Lamb does not want to end his life yet, but knows that as he gets older he will inevitably need assistance to die. He argues that the current law – which prohibits any assistance and carries up to fourteen years imprisonment if someone is convicted – breaches his human right to a private and family life.

Five years ago, I asked our courts to give me the right to control my own death and they told me to wait. Since then I have watched and waited as new evidence has emerged and progressive countries have given millions of others the choice I have asked for. And still the UK Parliament has done nothing. I have no option but to ask the Court to intervene again. I need them to help me, and many others in my position, to end this cruel and discriminatory law” – Paul Lamb

Alongside Jane Nicklinson, the widow of locked-in sufferer Tony Nicklinson, Paul Lamb previously challenged the UK’s 1961 Suicide Act by taking a case to the Supreme Court in 2014, and the European Court of Human Rights. However, whilst the Supreme Court reached a split verdict on the legality of the UK’s prohibition in 2014, including a notable dissent from the now President of the Supreme Court, Lady Hale, it held that Parliament must be afforded an opportunity to debate the issue before the courts might decide to change the law. 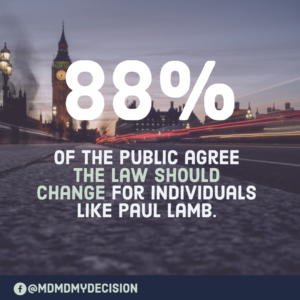 But then in 2015, the House of Commons rejected a proposal from Rob Marris MP which would have legalised assisted dying for those who are likely to die within six months, by 330 votes to 118.

Assisted dying is now legal in this form in five countries, most recently Canada, and is also legal for terminally ill people specifically in one country, eight US jurisdictions, and soon to be in the Australian state of Victoria.

Recently, new figures released by the Assisted Dying Coalition, of which Humanists UK is a member, also found that more than one person a week now travels to Switzerland to end their life. New Research from My Death, My Decision also indicates that 88% of people in England and Wales favour assisted dying for those who are incurably suffering, in at least some situations.

“I am paralysed from the neck down and live in a state of constant pain. In the future my suffering will inevitably become too much to bear. When that happens, I want to be able to control and choose the circumstances of my death. As the law stands, my only option would be to die through the inhumane process of dehydration and starvation. This situation cannot be allowed to continue.”

Commenting on the announcement from My Death, My Decision’s Patron, MDMD’s Chair Trevor Moore said:

“Throughout his life, Paul Lamb has stood up for the rights of others, and today he has done so once again. His case encapsulates what the campaign for a fairer and more compassionate law on assisted dying is about.”

“In his judgement on the Tony Nicklinson case, Lord Neuberger remarked there was “significantly more justification in assisting people to die if they have the prospect of living for many years a life that they regarded as valueless, miserable, and often painful, than if they have only a few months left to live.” We applaud Paul’s bravery in taking this case forward and hope that compassion and respect for his freely reached decision will prevail.”