My Death, My Decision responds to Lords debate of new Assisted Dying Bill 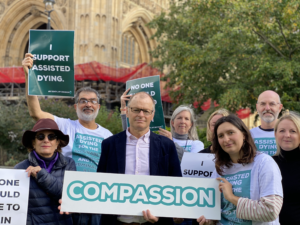 Plans to allow doctors to help terminally ill adults end their lives are closer to becoming law today, after a new Assisted Dying Bill passed its second reading in the House of Lords. My Death, My Decision, which campaigns to legalise assisted dying for those with either terminal or incurable conditions, has welcomed the Bill’s progress and the contributions from several peers who called for an expansion to include the incurably suffering.

The Assisted Dying Bill was proposed as a Private Members’ Bill by Baroness Meacher, who is the Chair of the campaign group Dignity in Dying. Under her proposals, adults of sound mind in England and Wales would soon be allowed to request assistance to die if they had six or fewer months left to live. Each request would need the approval of two independent doctors and a High Court judge.

A number of peers, including Lord Vison, Baroness Bakewell, and Lord Taverne, also highlighted cases of incurably suffering individuals who wouldn’t be covered by the Bill or called for it to go further by including the incurably suffering. Additionally, Lord Kerr of Kinlochard made special mention of My Death, My Decision’s 2021 Doran Lecture – delivered by the former Court of Appeal Judge Sir Stephen Sedley – when explaining his support for a change in the law on assisted dying.

Commenting on the second reading, My Death, My Decision’s Chair Trevor Moore said:

Your ticket for the: My Death, My Decision responds to Lords debate of new Assisted Dying Bill

My Death, My Decision responds to Lords debate of new Assisted Dying Bill