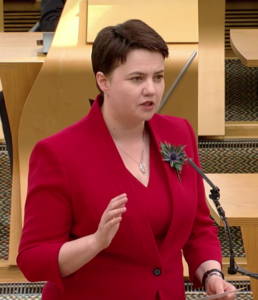 The Sunday Telegraph has published a letter to the editor from My Death, My Decision’s Chair, Trevor Moore, in response to a column by Ruth Davidson.

In her article, the former Scottish Conservatives leader who is due to join the House of Lords acknowledged that her views on assisted dying had changed after witnessing a number of close loved one’s battle dementia, and that she now regretted not originally supporting proposals to change the law.

Welcoming her comments, the full text of the letter published in the telegraph from My Death, My Decision is below:

‘SIR – Ruth Davidson (Comment, December 27) is not alone in changing her views on assisted dying after seeing the effects of dementia on a loved one.

It would, of course, be essential for any assisted dying law to require mental competence throughout, as is the case in many jurisdictions that already have such a law. In order to help those in early-stage dementia, before they lose their capacity to safely make a life-ending decision, Britain needs a law that does not limit eligibility to those with a short life expectancy.

A public inquiry is needed so that politicians can hear evidence from around the globe, including those jurisdictions such as Canada and Spain, where laws extend not only to the terminally ill, but also the incurably suffering. The Justice Secretary must stop ducking the issue.’

Your ticket for the: My Death, My Decision’s Chair responds to Ruth Davidson’s Telegraph column on assisted dying