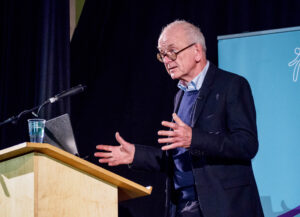 Henry Marsh, a leading neurosurgeon and patron of My Death, My Decision, has called for an ‘essential’ inquiry into assisted dying.  He has been prompted by a cancer diagnosis, and been backed by a group of 56 MPs and peers who have sent a joint letter to Justice Secretary Robert Buckland, calling for an inquiry. The letter was organised by My Death, My Decision and Humanists UK.

The MPs and peers come from the Conservatives, Labour, Liberal Democrats, SNP, Green Party, and the Crossbenchers, and include some who had previously voted against changing the law.

The letter notes the large scale BMA poll of doctors which found half of doctors personally support a change in the law, and a broad form of assisted dying inclusive of those who are incurably suffering as well as those who are close to death. Many jurisdictions, including Canada and New Zealand, have introduced, or are considering assisted dying legislation.

‘Having spent a lifetime operating on people with cancer, the prospect of dying slowly from it myself fills me with dread. Despite the best efforts of palliative medicine, I know that dying from cancer can still be a very horrible business – for both patient and family, despite what the opponents of assisted dying claim.’

‘I fiercely believe that if people in my situation knew they had the ability to choose how, when, and where they would die, it would greatly reduce their suffering. Knowing that I had this choice, if life became unbearable, would certainly give me much greater confidence now in facing whatever the future might hold for me. But as the law stands, I am not allowed this comfort, and the law insists instead that I must suffer. Many politicians have shown a striking lack of compassion by ducking this issue for too long, and are inadvertently guilty of great cruelty. Irrespective of your view on assisted dying, I would hope everyone could agree that our laws should be based on evidence and informed decisions, not alarmist, unfounded opposition that flies in the face of all the evidence from countries where assisted dying has been legalised. It’s time for all MPs to start taking this issue seriously and I urgently call upon them to undertake an inquiry into the law.’

‘Henry Marsh is a strong and vocal supporter of MDMD’s campaign. I am deeply sorry to hear of his illness and the difficult decisions he now faces which are made harder by the cruel UK law that denies him the option of a compassionate assisted death. An inquiry is essential to allow evidence to be gathered from all sides of the debate.’

‘The letter Dr Marsh has helped bring about is incredibly significant as it demonstrates the growing sentiment among parliamentarians for considering a broad assisted dying law which will apply to those who are incurably suffering as well as those who are terminally ill. The government has already recognised the weaknesses associated with time-limited definitions of “terminal illness” in relation to benefit claimants. The focus now needs to move beyond the narrower version of assisted dying which is limited to those with a life expectancy of six months or less. More and more people are realising the limitations of that approach. Instead, the UK should carefully examine the growing evidence of the broader, more compassionate approach, adopted by Canada and other countries.’

Read Humanists UK’s and My Death, My Decision’s open letter.

Henry Marsh, 71, has been diagnosed with prostate cancer and an advanced PSA score typically associated with stage 3 and 4 cancer. The typical mortality rate for those in this situation is between one and five years.

Your ticket for the: 50+ MPs and peers and MDMD patron Henry Marsh, after cancer diagnosis, call for assisted dying inquiry