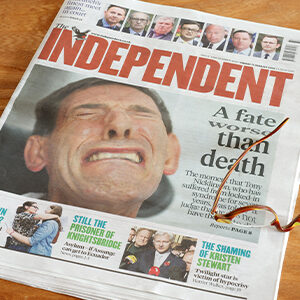 Title: In a society that wants legal assisted dying, who should be eligible for a right to die?

Submissions are invited for a new annual award, ‘The Tony Nicklinson Memorial Prize’ sponsored by My Death, My Decision. The prize (£500) is aimed at developing and fostering an interest in end-of-life choices and patient autonomy. This award is specifically aimed at trainees/ students (including undergraduates/ postgraduates/ doctoral candidates in medicine, allied healthcare professions, law, philosophy, and social sciences), and is in commemoration of the late right to die campaigner Tony Nicklinson.

Essays should be submitted in either word or pdf format to mail@mydeath-mydecision.org.uk

Submissions must be the original work of a single author and no longer than 2,000 words (minimum 1000 words, excluding footnotes). A suggested maximum of 15 references in any respected referencing style may be used. A bibliography is not necessary. Entries must be in Arial 11pt for the text and Arial 10 for footnotes. Candidates should supply their full name, email, phone number, and word count on a covering page.

The winning candidate will be judged by a panel of My Death, My Decision whose decision is final. All entries will be anonymised before submission to the judges. The winner will be announced on 31 June 2021, however, if there are a large number of entries this deadline may be extended.

The winning candidate will retain copyright ownership of their paper but will grant My Death, My Decision the non-exclusive right to publish the paper, in print and electronically, in their publications and other media. You will also agree to make any pre-publication editorial modifications to the winning entry that are required for this purpose.

Tony Nicklinson was a 58-year-old father of two, who became paralysed following a sudden stroke in 2004. His condition (locked-in syndrome) left him dependent upon around the clock care for almost every aspect of his life and in a state of constant pain. Although it was expected that Tony could have lived for a significant period of time, his condition would not have improved and he became determined not to spend the rest of his life in a state of increasing misery. In 2012, he challenged the UK’s laws on assisted dying which makes it a criminal offence to help someone to die, on pain of up to 14 years in prison, even if they are suffering incurably and wish to end their lives but cannot do so because they are physically incapable. Six days after the High Court dismissed his case, Tony ended his life via his only legal means: starving himself to death. In his honour, his wife, Jane, continued Tony’s legal case through to the UK Supreme Court alongside MDMD’s patron Paul Lamb, where a majority of the UK’s highest judges ruled the law potentially breached Article 8 of the European Convention on Human Rights, but that Parliament should be given time to consider the matter before a definitive judicial ruling.

My Death, My Decision is a grassroots not-for-profit campaign group, which advocates for a change in the law to allow those who are terminally ill or incurably suffering the option of a legal, safe, and compassionate assisted death. We were founded to represent the interests of those facing constant and unbearable suffering, at a time when no other right to die organisation would, and to advocate on their behalf to secure a lasting change in the law.  We have quickly become one of the leading assisted dying organisations in England and Wales. We are advised by an expert medical group, are a founding member of the UK Assisted Dying Coalition, and at the forefront of social change: nearly 90% of the public now favours a change in the law to allow assisted dying for those who are incurably suffering or terminally ill

Your ticket for the: Submissions invited: The Tony Nicklinson Memorial Prize