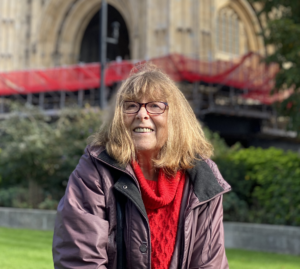 A British woman who has travelled to Switzerland to end her life has urged politicians to launch a parliamentary inquiry into assisted dying, as her last wish before she died. Her plea has been released by the campaign group My Death, My Decision to coincide with a worldwide ‘beacon of light’ initiative for the legalisation of assisted dying, organised by the World Federation of Right to Die Societies.

She had been suffering from several incurable medical conditions, including chronic arthritis which made her incapable of walking more than a few feet without pain,and endured regular brain bleeds..

Dawn had been reluctant to end her life, but due to her rapidly deteriorating condition felt compelled to travel to Switzerland whilst she was physically capable of doing so.

Prior to her death, Dawn recorded a statement urging politicians to support her right to die and to launch a parliamentary inquiry into the law. Her appeal has been released as part of a worldwide initiative, where activists from more than 30 countries around the world have demanded the legalisation of assisted dying.

It also follows shortly after a new YouGov poll, commissioned by the campaign group My Death, My Decision, found that for the first time ever a majority of MPs personally support the legalisation of assisted dying.

Assisted dying is unlawful in England and Wales and those found guilty can face up to fourteen years’ imprisonment.

Recently, a bill to legalise assisted dying for those with terminal illnesses passed its second reading in the House of Lords. However, this bill would not have covered those facing unbearable but non-life-threatening conditions such as Dawn.

‘Dawn’s story underscores the cruel and indefensible nature of our existing laws on assisted dying. Yet tragically, her story is not unique. At least one Briton will now travel to Switzerland from the UK to end their lives every week. Many will choose to do so earlier than they would have otherwise wished, because they fear they will not be physically capable of doing so at a later date.

‘Importantly, Dawn’s story also highlights the critical need for politicians not to lock those with incurably suffering outside of efforts to change the law on assisted dying. Under the House of Lords current proposals, people with unbearable suffering who have more than six months to live will not qualify for the choice of an assisted death. This means that the prospective law would not have helped Dawn, nor the thousands of other people in her situation. Nearly nine in ten (88%) members of the public agree that assisted dying should be available for either those suffering from terminal or incurable conditions. And according to the BMA members’ survey, a majority of medics would prefer a change in the law  inclusive of both the terminally ill and incurably suffering.

‘Dawn’s heartfelt plea for a change in the law is therefore a timely reminder of the urgent need for politicians to pick up the baton left by brave campaigners before her, and to speak up for change on behalf of both those with terminal or incurable conditions.

‘As a longstanding member, campaigner, and friend of My Death, My Decision we are glad that Dawn has finally been able to find peace. But we urge lawmakers to ensure that she is the last case of someone forced to leave their home in the UK in order to do so. Now is the moment to change the law on assisted dying.’

In a statement before her death, Dawn said:

‘I have all but lost my freedom of movement, and can no longer walk great distances. Even a short walk causes pain. I have to take a fair amount of medication each day. So far, I have managed without needing care support, but I know that in the near future, this will change. However, even the best care in the world would not alter the fact that it is just an endless, often difficult, and usually painful, daily management of several, incurable issues. My left arm is weakened, and I can no longer do much with it. Coupled with severe arthritis, it is both challenging and frustrating. More than that though, as a result of untreatable brain bleeds which could continue, I am losing the ability to express myself both verbally and in writing.

‘My body is old, worn out, and failing. I am really fearful of being trapped in that body with no way out. It’s a horrible feeling, because I have always been independent.  I chose how to live my life; and now the suffering and sadness feel, at times, unbearable. I believe I should be able to choose how to die. My choice would be legal Assisted Dying in the UK. However, because this is not possible – and would not be possible for me, even if the bill proposed by Baroness Meacher is passed – I have applied, and been accepted, for an Assisted Death in Switzerland. A death that I and I alone choose and physically act on, and take sole responsibility for. But I have to go while I am still able to travel, and while I still have capacity. While I am still able to – alone and independently – release the drug into my system. The drug that will ease my way to a death of my choosing – a peaceful, pain free and dignified death.

‘Baroness Meacher, when asked about promoting a more inclusive policy on assisted dying states how difficult it’s been so far and how much opposition she meets. This makes sense, because many MPs have very little knowledge or understanding of assisted dying, it’s process and safeguards. That’s why I believe that Baroness Meacher’s Bill should be used as a spring board to call for a comprehensive Parliamentary inquiry into assisted dying. Such an inquiry could provide all the evidenced needed to enable MPs to make an informed choice when voting and in turn, create a fair and compassionate assisted dying law here in the UK.’

For any more information or comment please contact Trevor Moore, My Death, My Decision’s Chair at trevor.moore@mydeath-mydecision.org.uk or phone 07967 000546.

Trevor Moore and Alex Pandolfo, who accompanied Dawn to Switzerland, are available for interview.

Footage and photographs of Dawn Voice-Cooper, free for media use.

Your ticket for the: Incurably suffering woman calls for change to assisted dying law before ending her life in Switzerland