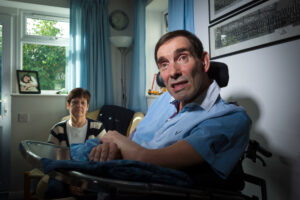 Tony Nicklinson with his wife Jane

Marking the ninth anniversary of Tony Nicklinson’s death, My Death, My Decision is pleased to announce the winner of this year’s Tony Nicklinson memorial essay competition. Rees Johnson, a doctoral candidate at the University of Manchester currently researching the history of assisted dying, impressed the judges with his submission to the question: ‘In a society that wants legal assisted dying, who should be eligible for a right to die?’.

Entries were assessed on their critical engagement with the moral issues raised by the question, and the quality/originality of their arguments.

In addition to discussing the importance of mental capacity and assisted dying, Rees’ winning essay deftly highlighted the social and cultural context in which autonomous decision-making occurs. His essay also considered the ‘real crux … [of] whether there should be a time constraint on a qualification [of eligibility for assisted dying]; or whether only those with severe, terminal illness should qualify’. He concluded that whilst it may be politically expedient to impose such a requirement it is not ‘ethically or medically motivated’.

‘Tony Nicklinson was a courageous man, whose fight to enshrine a right to die with dignity into law was an inspiration for us all. I am delighted that My Death, My Decision has been able to launch his award to honour his legacy and memory. I congratulate Rees for this thought-provoking and insightful essay, and thank everyone for their interest in this competition.’

About The Tony Nicklinson Memorial Prize

The Tony Nicklinson Memorial Prize is an essay competition sponsored by My Death, My Decision which is aimed at developing and fostering an interest in end-of-life choices and patient autonomy among students. The prize of £500 is aimed at trainees/ students (including undergraduates/ postgraduates/ doctoral candidates in medicine, allied healthcare professions, law, philosophy, and social sciences), and is in commemoration of the late right to die campaigner Tony Nicklinson.

This year applicants were invited to submit an essay (with a maximum of 2000 words) on the theme of ‘In a society that wants legal assisted dying, who should be eligible for a right to die?’.

The winning candidate retains copyright ownership of their paper but has granted My Death, My Decision the non-exclusive right to publish the paper, in print and electronically, in their publications and other media.

Tony Nicklinson was a 58-year-old father of two, who became paralysed following a sudden stroke in 2004. His condition (locked-in syndrome) left him dependent upon around the clock care for almost every aspect of his life and in a state of constant pain. Although it was expected that Tony could have lived for a significant period of time, his condition would not have improved and he became determined not to spend the rest of his life in a state of increasing misery. In 2012, he challenged the UK’s laws on assisted dying which makes it a criminal offence to help someone to die, on pain of up to 14 years in prison, even if they are suffering incurably and wish to end their lives but cannot do so because they are physically incapable. Six days after the High Court dismissed his case, Tony ended his life via his only legal means: starving himself to death. In his honour, his wife, Jane, continued Tony’s legal case through to the UK Supreme Court alongside MDMD’s patron Paul Lamb, where a majority of the UK’s highest judges ruled the law potentially breached Article 8 of the European Convention on Human Rights, but that Parliament should be given time to consider the matter before a definitive judicial ruling.

Your ticket for the: MDMD congratulates winner of 2021 Tony Nicklinson essay competition